11 November 2015
Awards at the Gathering

The theme at this years event was Food & Drink. There were many different speakers who gave interesting talks about different aspects of the theme and, as usual there was the opportunity to network and chat with friends old and new.

Part of the programme was an award ceremony to recognise the work being done by volunteers across the National Park. The 4 categories were, Long Standing Champion, Local Food Champion, Young champion of the Year and Champion Community.

Out of this year’s four categories, a special award went to one Ardentinny resident Val Kennedy who scooped a highly commended ‘Silver Perch’ award aptly named to tie in with this year’s theme of Food and Drink. The award for the ‘Long Standing Champion’ category is in recognition of a community member who has shown an on-going and sustained commitment to supporting community life in their area. Judges described Val “as someone who for many years has shown such commitment to Ardentinny and in such a quiet way so appreciated by her community. Every village needs someone like this, someone who just quietly makes things happen and who brings people together through humour and hard work. 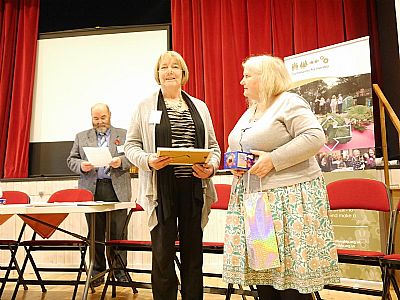 Dennis Gower was also a recipient of the Silver Perch award for his part in the development of Glenfinart Walled Garden.

Below are the details of all the awards.

Young Champion of the Year

This is not the first time there has been a resident receiving an award at these events. 2 years ago Eileen Connell received a silver award for Volunteer of the Year. 3 silver awards in the village is good going.