Our usual Spring beach clean and the clean up of Coronation Wood has now been postponed because of the restrictions caused by the coronavirus. However, we can all do our bit individually.  When you are taking your daily exercise, please take a rubbish bag with you and do your own clean up, and take a ramble through the Coronation Wood and do a bit of tidying up. We will continue to put out poo bags in the containers. Hopefully we will all get together again soon. Take care.

Letter of objection to SEPA regarding the proposed fish farm from Ardentinny Community Council.

Ardentinny Community Council wishes to express its opposition to this proposal.

We do so in the belief that the Dawnfresh proposal is ill-judged as to its location and design,  failing to reflect current scientific evidence concerning sustainable aquaculture as recognised by SEPA.

We note, in particular, that SEPA has recently completed a period of research and consultation that has lead it to conclude that the existing regulatory approach is outdated  and  does  not “adequately protect marine life”  and that accordingly SEPA will be introducing

“a revised regulatory regime that will strengthen the protection of the marine environment for the people of Scotland” in June 2019[1].

It seems particularly unfortunate that the Dawnfresh proposal has been submitted shortly before these new regulations come into force.

We  welcome the fact that the SEPA statement continues:

“In practice, we anticipate this [new regulatory framework] will lead to fewer fish farms in shallower, slow-flowing waters and more fish farms in deeper and faster-flowing waters. We also anticipate it will encourage the adoption of new technologies such as partial and full containment to capture organic waste and any remaining medical residues. SEPA has seen some industry operators successfully developing new approaches such as non-chemical ways of managing fish health. Our new regime will support these encouraging developments.”

However, the Dawnfresh proposal meets none of these criteria, being in shallower, slower-flowing waters, far from the open sea and located in a fragile and already damaged environment.  Furthermore it  does not address   the issues raised in the new Regulatory Framework[2] :  it does not mention any of the new approaches that SEPA has recommended, such as non-medicinal farming using wrasse, full or partial containment or enhanced fallowing[3].

It is to be welcomed that the Dawnfresh Non-Technical Summary explicitly states that  in-food medicine  is not being proposed, given the recent evidence concerning Emamectin benzoate[4].

However, this approach means that Sea Lice control will rely entirely on the use of bath treatments, using Cypermethrin, Deltamethrin and Azamethiphos, all of which pose a serious risk to the marine environment   if used in excessive dose.

For instance the  European Agency for the Evaluation of Medicinal Products states that Azamethiphos has a “low therapeutic margin of safety”[5]   and SEPA has stated that “ it is possible that all uses will eventually be phased out through European legislation”[6].

With regard to Deltamethrin, we are concerned that there is evidence that the effects may be felt well away from Fish Farm itself, as  Ernst et al (2014) found mortality and paralysis effects on amphipods up to 350m  from cages.   This is the approximate distance from the Fish Farm to the beach at Ardenfield in Ardentinny Beach, a popular recreational area.[7]

We note that Cypermethrin is a priority substance for action under the Water Framework Directive.[8]

Recent studies have confirmed that Sea Lice are increasingly developing resistance to such treatments[9]. This problem is exacerbated by the limited number of treament chemicals available and so is likely to become more pronounced given that in-feed treatment is not proposed by Dawnfresh.

If resistance does develop (or develops further, if Sea Lice in Loch Long have already been exposed to these treatments in other facilities) then it is possible that maximum dosage will be insufficient to contain Sea Lice infestation.  This will result not only in high mortality to dawnfresh stock, but also to wild Salmonids in the Loch.

Further, we are concerned about the possibility of excessive doses being given, in that SEPA reports that a significant proportion of the 19% of non-compliance reported in 2017 involved   “quantities of medicines used exceeding that permitted”[10].

The Community Council is also concerned that this  proposal has not considered the treatment for other  diseases that Rainbow Trout may be prone to, given that these include those “caused by bacteria (bacterial gill disease, furunculosis, bacterial kidney disease, fin rot), parasites (Gyrodactylus, Chilodonella, Trichodina, Epistylis, Trichophrya, Ichthyopthirius, Ichtyobodo, proliferative kidney disease, amoebic gill infestation, Coleps), fungi (Saprolegnia), and viruses (infectious pancreatic necrosis, viral hemorrhagic septicemia, and infectious hematopoietic necrosis)”(Noble and Summerfelt 1996)[11].  No mention is made in this proposal on how such infections would be dealt with and what treatments might be used.  In particular, the proposal fails to mention what antiobiotics are intended to be used. However, the Farm Antibiotics report for 2017 stated that usage data for 70% of the trout sector showed mean antibiotic usage levels of 19mg/kg for trout[12].

The Community Council is also concerned about the apparently casual approach of this proposal (for instance the error in Form C Section 2, 2.1) and the absence of any thorough  study into the ecology and local conditions pertaining to this site.

The Community Council’s objection  to the proposal  is reflected in the community’s overwhelming opposition. A survey of residents, carried out by the Community Council and which had a 90% response rate, found that 73% opposed the Dawnfresh application.

The Community Council believes that this proposal falls far short of SEPA criteria. We request, therefore, that SEPA rejects this application or, at the very least, delays approval until it can be considered fully under the new, improved regulations that have been designed to enhance environmental protection, reflecting improved technology and scientific understanding.

on behalf of Ardentinny Community Council

[4] WAT-PS-17-03: INTERIM POSITION STATEMENT FOR PROTECTING THE WATER ENVIRONMENT UNTIL SUCH TIME AS A DIRECTION IS ISSUED ON AN EQS IN RELATION TO EMAMECTIN BENZOATE IN FINFISH FARM REGULATION file:///media/fuse/drivefs-d54039453ba43b6b45504ef59c4bd652/root/Rob%20Misc/Community%20Council/Fish%20farm%202019/SEPA%20docs/sepa_position_statement_implementation_of_car.pdf

The Dawn Fresh Fish Farm group have offered to put on a Visit to Dawnfresh’s trout farm at Loch Etive so they can see a trout farm in operation and what they are proposing for Ardentinny.

They have spaces for up to 4 people and will arrange transport once a date can be arranged.

Anyone wanting to take up the offer of a visit should contact the Community Council via ardentinnycc@gmail.com.

The Community Council recently undertook a door to door survey of the village in respect of the Dawn Fresh Fish Farm proposals.

This survey consisted of one simple question are you for, against or neither of these regarding the project.

The outcome of the survey gives the Community Council the direction within which most of the village want to drive the dawn fresh fish farm project.

The results for the survey can be seen below:

This equates to a 90.13% response rate from the whole village

Given the results noted above it is clear that the majority of the Community (73.72%) do not want the project to go ahead, The Community Council will now formally work with the AFF the Clyde Group and come up with an action plan to fight the proposal.

It is hoped that others including the AFF the Clyde group will also write letters opposing this, the letter will be displayed on the notice board, website and formally sent out to everyone on the mailing list as an update

There now is an email address which can be used for two-way contact between residents and the Community Council.

If you would like to be kept up to date with the activities of the Community Council please email ardentinnycc@gmail.com and ask to be included in the mailing list.

If you would like to be removed from the list at any time, please email and let us know.

The event has developed from a collaboration between many of the groups along the Shore Villages and is part of the development of a shore collaboration which grew from meeting that was held in September 2017. Since then we have managed to develop a communities calendar and a The Shore  Directory of all the groups we have here locally .

The Ardentinny Conservation and Heritage group and in particular Eileen and Marian who made the home-made soup using the ingredients provided by Ardentinny Community Council and the soup kettles which were loaned by Ardentinny Hall. Jo Carr organised the table decorations.

From Ardentinny, Sandra, Sadie and Roslyn who organised the successful tombola table

Blairmore Village Trust whose volunteers (Bridget, Ann, Gordon, Pat Moira, Iain and Cathie ) made the sandwiches using Blairmore Village Hall (who also provided the shortbread and table napkins) and Agnes who made the menu cards for each table.

The Hub, who meets at Blairmore Hall, provided the sparkling non-alcoholic wine which provided to be a big hit with everyone

Ardentinny Community Trust, who provided a stack of mince pies for everyone.

Lorraine, Mandy and Brian who provided the tea, milk and juice.

The Younger Hall, especially Russell and Helen who opened and prepared the hall in the morning.

A big thanks also to Kilmun Community Council, who, for the most part co-ordinated the event and Brian who was MC and Diane and me who helped with the raffle, serving, clearing up etc. A thanks too to Bob, our new National Park representative who donated, supported and helped us all with the event.

The Festive Lunch is self funded from the raffle and Tombola and this year we had terrific donations from many of our local business and individuals. We would like to extend a big thank you to:

And many individual residents who sourced and donated raffle prizes.

Lastly but certainly not least, a big thank you to the fiddler group for the music to keeping us entertained and to the children of Strone Primary who delighted and entertained us with their singing (and of course their teachers and helpers who made it happen!)

The funds that are left over are being carried over to next year’s lunch and to invest in,  for instance new table clothes, that can be used not only for the festive lunch but an be requested for other events that the halls may have.

Wishing everyone a great Christmas and a Happy New Year

Toast on the Beach

the car park by the picnic area

(just past the Bowling Club)

Bring your own Toast

Anything from Whiskey to Hot Chocolate 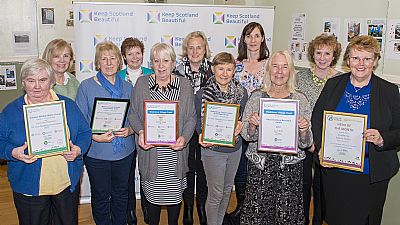 Ardentinny Conservation & Heritage Group joined with groups from Kilmun, Blairmore, Innellan and Kirn at a Seminar held by Keep Scotland Beautiful to celebrate the work done by the groups to improve their individual areas. It highlighted what can be achieved when groups and people work together.